The Cursillo Movement is sanctioned by the Catholic Church and has received Papal recognition.

Our Center is overseen and governed by a Secretariat consisting of nine members. They usually meet every other month (unless there is a pressing issue which requires an emergency session). It is the Secretariat’s duty to protect the workings and the sanctity of the Cursillo movement of the Youngstown diocese. Members are nominated and chosen if they are active in the movement and are living the Cursillo Method (Ultreya and Group Reunion). Secretariat members serve a one to two year term. 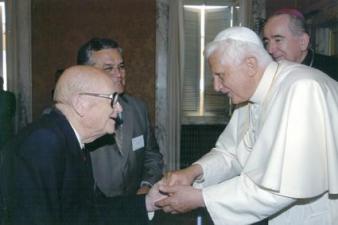 Eduardo Bonin, one of the founders of the Cursillo Movement, meets with Pope Benedict